I was going to do a whole post on this, but I’m going to cut it short. Suffice to say, there was a lot of good stuff going on in Germany in the 80s. A lot of “80s music” with its heavy use of the synthesizer spawns out of music of the 70s and sort of an underground disco club culture. I’m just highlighting some of the artists I’ve come across but feel free to comment with others you think SHOULD make the list.

UPDATE: Hmmmm, I made the post longer than I expected, but I would say that this post involves a side of the 80s most people in America might not know about, German (mostly) 80s super synthesized club(?) dance(?) music. “Hi, this is Mike Mareen” – best opening line to a song ever

I actually don’t know other songs by this guy, but this one is good enough to name him the Italo-Disco-King, I mean, he’s freaking nuts looking (and that’s coming from a guy that usually looks unkempt/odd).

These song are all very similar to me. I almost want to go on a rant like, “it’s all the same song!”

However, that said, detailed analysis (for about 20 minutes) of the lyrics of these songs reveals a deeper meaning and I think if I had to put things into a chronological order it goes something like this:

Oh we are daytime friends and nightime fools
Want to play this game
And break the rules
Tears of love are frozen tears
Geronimo’s Cadillac
Is making all girls turn mad
Geronimo has a heart – Oh it’s a drag
Geronimo’s Cadillac
Is making all girls turn sad
Geronimo has a heart – Oh it’s a drag”
(basically at this point he’s learned the rules of love, he’s such a player that he breaks rules knowingly, very risky, but also he doesn’t give a fuck about these women, his true love is his car and he’s basically just using the women, leaving them out in the cold with frozen tears of love)
3. Cheri Cheri Lady – “
Oh, I cannot explain
Every time it’s the same
Oh, I feel that it’s real
Take my heart
I’ve been lonely too long”
(so in this one he’s messed up, he tried to play the game but failed and has been lonely for a long time, but then he meets this great Cheri Cheri lady not baby, not girl, she’s older, even though it’s “always like the first time” it’s not his first time, he even hints later on “easy come, but I think easy go” like he knows this relationship isn’t going to last “pain in his heart” “who is right who is wrong” also imply he’s had relationships that didn’t work in the past)
4. Brother Louie – “
Oh, she’s only looking to me
Oh, let it Louie
She is undercover”
and later on
“Stay, ’cause this boy wants to gamble
Stay, love is more than he can handle, girl”
(So in this final installment of our quartet he’s been down on his luck so long, presumably Cheri Cheri didn’t work out, and now he’s starting to get SUPER desperate, to the point where he’s begun to scam on his BROTHER’S GIRL! The 2nd quote is even worse, revealing that he’s at the point where he wants to confront his brother and be like “yeah, so what I’m fucking your woman” like, he wants her to just stay with him because he wants to gamble and thinks his brother is a cuck. A real dick move on this one, and so ends our saga).

Also, I think the undisputed KING of videos for these songs has got to be Geronimo’s Cadillac. I mean, the production quality is just difficult to describe in words.

The opening of this video is just so good. I don’t really like the song that much after the first bit, but the video is pretty epic.

This guy is great, his voice seems a little whiney. It’s not your typical singer’s voice, but I think it really works with the music. It’s sort of tongue and cheek, like, “this guy’s supposed to be a sex symbol?” he’s a chubby older guy, but he has SWAG. I will say though, “Chinese Eyes” is walking the fine line of racism/fetishism, and the fact that they couldn’t just get an Asian woman in the video sort of says it all. Still a great song, and the video is weird as hell which I like.

Giorgio Moroder (he’s Italian, but in Germany in the 70s he got his start, shined in the 80s)

I was late to the Scarface party. I had worked in a VHS/DVD store back in high school and a lot of people were stealing the DVD (“Yo, cop the album!”) from the store (it didn’t help that our security system didn’t actually work and the higher-ups never actually paid the money to fix it, just were unhappy with the employees). Anyway, people were stealing this movie and I had heard it was a gangster movie. The movie had been out of print meaning you couldn’t get it, you couldn’t buy the DVD anywhere. In our age of “I want a movie I download a movie” this isn’t an issue, but I remind the reader of a time when you used to have to “binge” a season of something by purchasing a barrel full of VHS tapes where 1 tape had maybe 2-3 episodes of a show on it.

Anyway, I finally ended up finding out what the appeal was about when my friend Chris Cerro showed me the movie in college one night in our dorm. It was AMAZING, from the start of the movie. My friend Chris was Cuban American, so maybe it hit closer to home for him, I don’t know, but I do know that I’ve met a lot of Cubans that HATE Castro and the whole revolution. Still I think the opening of Scarface, with the amazing sound and the spliced in Castro clips is probably the best example of world building or exposition EVER in a movie. You know where Tony is coming from and partially his motivation.

So from the beginning of the movie we open with Castro rejecting people from Cuba (probably seen as subversives or counter-revolutionaries and let’s face it, the wealthy who COULD leave Cuba did leave Cuba). But in addition to this rejection of people, the mass migration to Florida, there’s this EVEN MORE AMAZING sound. I loved it. I didn’t know it at the time, but that intro was from none other than THE MAN Giorgio Moroder.

The whole soundtrack is good, the movie is a modern-day tragedy and tell the timeless tale of someone willing to risk it all for a little more. I actually think it’s really interesting that the thing that takes Tony down in the end is the fact that while he’s ruthless and a complete dick to most people, there’s a scrap of humanity in him that he’s not willing to kill children in cold blood. So, at least he has SOME limit, but he definitely took morality and pushed it to the limit.

So I think most of us will know this soundtrack for the song by Limahl, “Turn around, look at what you SEEEEEE,” but in addition to this great song (produced by Giorgio), there are a ton of good tracks from the man, the legend, Giorgio Moroder. Here’s an extended version of one of those, Ivory Tower.

In addition to great synth-heavy tracks, you also have just pure whimsically fun songs in the soundtrack. Overall, just a great. 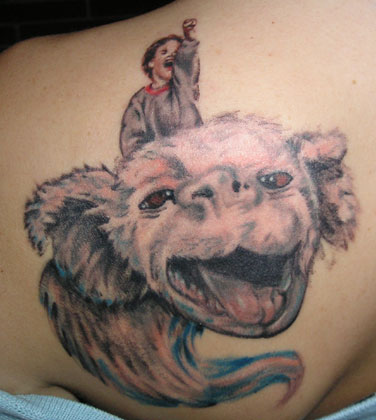 These 3 are just great songs that I originally had attributed to other artists but it turns out Moroder was the one responsible for that great sound. Sure he didn’t do the lyrics, but isn’t the human voice just one of the many parts to a great song (and not always the most important part?).

And finally, while not amazing in my opinion, a solid track by Daft Punk that paid homage to this great man was “Giorgio by Moroder.” It’s really great because you get to hear him actually describe his early life which I think is great, I do really like that part as well as the slow build-up to the “click” that he knew was needed.