The title comes from a reference to Tom Hughes, a kid from Charter that was pretty weird (the quote is actually his from once during homeroom where he was dancing around singing it…) among a high school of pretty weird kids. Anyway, the mitochondria are small units within the cell that take care of producing energy from the sugar we provide. To visualize this, see below, the sugar is glucose. Think of any carbohydrates that you eat being made up of glucose which is what the sugars are converted to in the liver or stored as glycogen. We eat carbs, or proteins (which if there are no carbs get converted into glucose or acetyl coenzyme A) or fats (which get broken down into fatty acids (which can be converted by the mitochondria into acetyl coenzyme A) or glycerol which is converted by the liver into glucose)). Long story short, everything (carb, fat, protein) is converted to glucose or acetyl coenzyme A. The body can use glucose and convert it to ATP directly (see Glycolysis below), but not very efficiently. However, some creatures can survive completely in this way (for example, if yeast have sugar and no oxygen, they survive this way through fermentation, except that instead of making pyruvic acid as a byproduct they make ethanol AKA THE GOOD STUFF). All life forms make use of glycolysis inside of cells, and there’s some evidence that ancient conditions on earth may have allowed cells to perform the process WITHOUT enzymes, meaning that you could have sugars (which can form spontaneously under the right conditions) being broken down into energy spontaneously. Nowadays on earth we and all other organisms use enzymes to break down sugar with glycolysis. But the process described above usually happens when there is no oxygen present, what about the other 3/4 of that diagram?

Well, to finally get back to the point, the mitochondria is responsible for carrying out energy production using oxygen. There are many species that do not produce energy using oxygen (mainly microorganisms that live in environments without oxygen) and there are many many many species (again mainly microorganisms) that do not have mitochondria but still use oxygen to make energy.

This gets to the second interesting part about mitochondria. There is evidence that mitochondria, although firmly a part of many organisms now, was once a stand-alone species. Billions of years ago, it’s possible that mitochondria formed a symbiotic relationship with another single-celled organism. A relationship that was so successful and so long-lived, that now mitochondria can only be found inside other cells. Indeed, most cells of a human have mitochondria and some have different concentrations of mitochondria depending on their need for energy (metabolically active cells like muscle and nerve cells have higher mitochondria counts per cell). The evidence for mitochondria being a separate species at one time stems from the fact that mitochondria have their own DNA  (mtDNA) and this mtDNA exists in most of its symbiotes (like humans) as a closed, circular DNA ring. Do humans have closed circular DNA? No. What do? Bacteria. Additionally, this mtDNA encodes enzymes and other proteins useful only for the mitochondrial function and A LOT of other DNA inside human chromosomes actually looks a lot like mtDNA that somehow was transferred into the human DNA and got stuck there (this happens so much so that only 37/1500 proteins in the mitochondria come from the mtDNA).

Well, it’s funny that I mentioned circular DNA for bacteria in that this relates to aging. Basically, because their DNA is circular, bacteria are all “immortal” and will replicate their DNA forever. This post is starting to go on forever, so I’ll save the third thing I find interesting about mitochondria (it’s role in aging) for another time. Thanks Zach and Dave for encouraging me to write about mitochondria, a topic about which I’m not an expert on but assumedly should know more than the average person.

So, almost every time I explain my current research to people, it’s something like “I do biology research” and then they ask “What kind of research?” and I then say “DNA repair” and then they say “DNA can repair itself?” That is the typical conversation but one thing that’s pretty amazing is that deoxyribonucleic acid (shown below), DNA, has become nearly ubiquitous in our culture. Everyone seems to know what it is, or at least something about it. The heritable genetic material that was hinted at but not verified as DNA until the famous Hershey-Chase experiment of 1952 has in less than 70 years become such a widespread idea, while the other major nucleic acid of life, ribonucleic acid (RNA), is still unknown to the vast majority of people.

DNA would be NOTHING without RNA, and DNA is largely inactive in the cell, it’s mainly there as the backup copy for RNA since it’s more stable. RNA can pair with DNA, get what it wants from DNA (use it as a template), and then leave DNA behind and go party with some proteins. This is the “central dogma” of biology (shown below).

What’s even more interesting is that RNA can fold up and do almost ALL the functions of life. That’s right people, RNA doesn’t need to go out to party with the proteins, RNA IS THE PARTY. RNA can replicate itself or cut itself (so emo) or join two pieces of RNA together. In fact, many many scientists believe that life began with a completely RNA world. Life is the random combination of RNA that eventually started “coding” into proteins. RNA may have started life, I wish people gave it the freaking credit it deserves (i.e. just knowing that it exists). DNA is like an old phone book or an SQL database, useful, but it might as well stand for Does Nothing Amazing.

Below is an example of the hot new (as of late 2012) gene editing system taken from bacteria’s innate immune system useful for them for chopping up viral DNA, useful for us for chopping up any DNA we want (you can program the RNA to be whatever DNA you want to cut). Almost every talk these days has a reference to this technology and for sure Jennifer Doudna will get a Nobel Prize for it (among others like Feng Zhang and George Church). 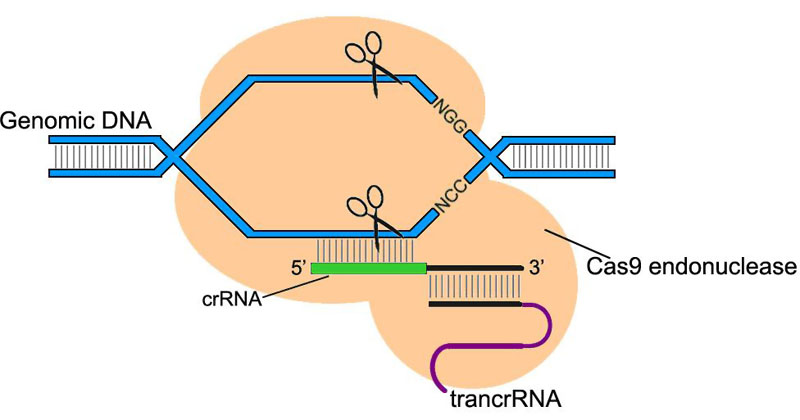